Sometimes I will say to a young apprentice, “My longest long-term relationship is with a chimney and a woodstove……over 40 years in the same place.” That tends to scare a young person and brings up a reaction of “Oh, if it gets too difficult, I have options……” Living in one place is something like a long marriage. When the Occupy movement was in full swing, I wanted to say to one of those protesters, “Well, why don’t you just occupy a garden, for a lifetime, and see how that works out? Why not try doing something CONCRETE every day?” I once talked to a man who was in an arranged marriage. “What’s it like?” I asked. “Well,” he said, “at first I didn’t like her. Then in the second decade I not only grew to like her, I loved her. And now, in the fourth decade, I deeply love her, but I have to say that more and more, she is a total mystery to me. I truly don’t understand anything about her.” My first decade in this place was like a love/hate relationship. I would go down to the cove after new-fallen snow and watch the sunset: “She’s so beautiful!” and a minute later the thought would be, “…..and she’s so friggin’ COLD!” What’s REALLY scary for an apprentice is when they get a sense that their longest long-term relationship is with an eternal spark that could be characterized as “conscience” or “consciousness” or “intent, beyond personality”. I’m building a storage building for seaweeds at the moment, because I know the world will continue to need a clear source of dietary iodine to protect against the radioactive iodine being released by so many nuclear reactors, not just the mess at Fukushima, and the words I feel like inscribing on the walls of this particular building are “quietude and stillness, emptiness and clarity, presence and compassion, radiance and light”. That’s the predominant mood of the moment, and I like living with people who are waking up to the fact that they’ve been living life after life in endless moods of enlightenment, in sacred contracts, in endless dream. Happy New Year! 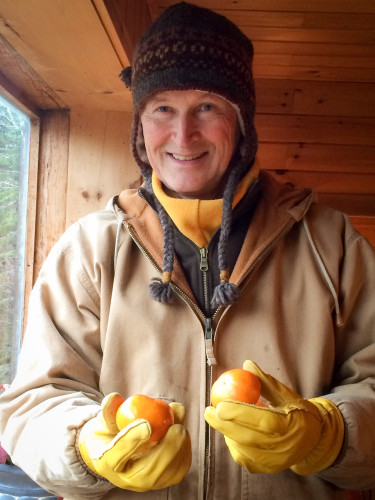