Umami is the fifth taste, after sweet, salty, sour and bitter. Both the tongue and the stomach have receptors for the taste which can be described as savory, meaty, or brothy. The umami receptors signal the body to start digesting foods, especially proteins. Umami is an underlying taste that makes everything else in this soup taste more delicious and appetizing. When you make this soup, make a lot, because you are going to have a good appetite! This soup doesn’t use meat for its basic stock, its dashi. Instead it relies on plant-based ingredients that are umami-rich: digitata kelp (see www.theseaweedman.com), shiitake mushrooms, and shoyu soy sauce. So here’s a picture of the first step: 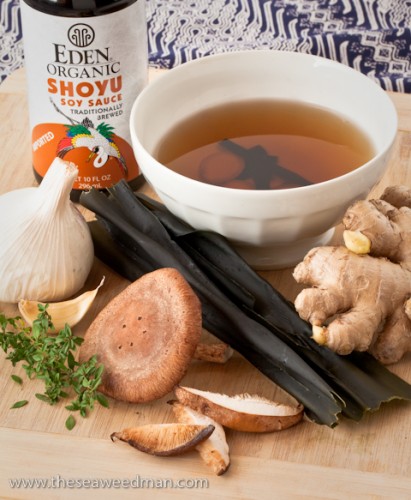 Fill a four quart soup pot half full. Soften a six inch strip of digitata kelp in water and then cut it up in half inch pieces with a scissors or knife. Yes, it’s slippery. That’s the sodium alginate which is a great detoxifier for the body. Add the digitata, turn up the heat, then add a few eighth-inch thick slices of ginger and plenty of peeled garlic cloves. Add a few dried shiitake mushrooms. Once they have rehydrated, remove them, cut them into small pieces, and add them back. Add thyme and shoyu to taste. Simmer this dashi (Japanese soup stock) for at least half an hour. While you are simmering the dashi, cut up root vegetables to add to the soup. 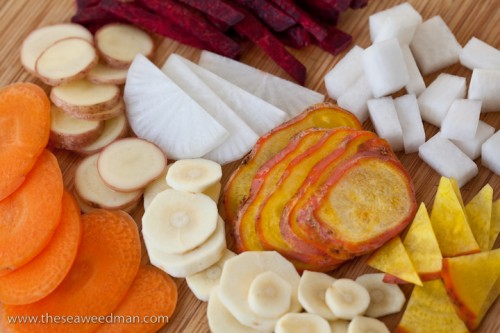 The photo includes carrot, red potato, daikon radish, turnip, rutabaga, and beets, and you could also add onion, burdock root, celery root, salsify. This soup builds from the sea to the soil to the air, and in evolutionary terms, it starts with ancient kelp and primitive mushrooms and then progresses toward the plants that have been brought from the wild into the garden. So slice them up thin and pretty, and add them to the pot, starting with the hardest roots that will require the longest cooking, proceeding toward the softer roots that won’t need as much time. When the roots are almost ready to eat, you will add chopped greens for the final three minutes of cooking and cover the pot. Use a variety of greens, and use a lot. The soup pot should be near full by now. Here’s a photo of winter greens from our unheated greenhouse in January: 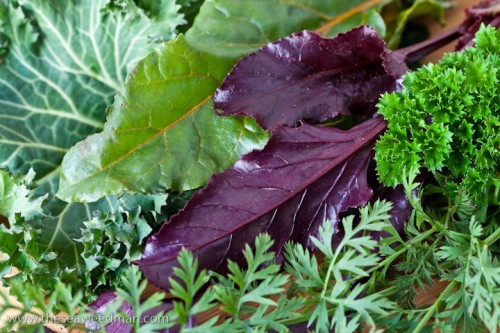 Kale and parsley and celery are always good additions, beet greens and spinach will bring variety, and even carrot tops, minced fine, will work. Top the soup with chopped scallions and serve hot. 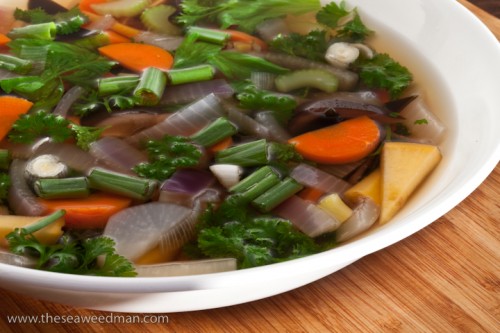 Now here’s a wonderful addition: In a separate pot, cook rice pasta for 15 minutes until al dente, drain the noodles, add them to the soup, and you now have umami vegetable noodle soup! I like this photo Nina took. I told her it reminds me of two little boats gently knocking together at the dock in the harbor. 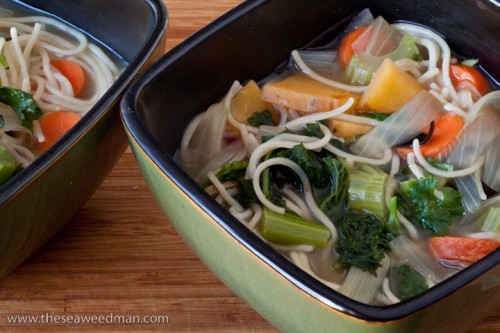