The Work Accomplished, We are Relaxed into Perfection.

In April when I launch the boats into the cove to start the seaweed harvest season, I always ask the universe directly for an omen. Then I listen and watch. (I’ve been doing this for forty years.) One year an eagle hovered over me. That felt like blessing and protection. One year I was standing in a newly launched boat, checking for leaks, and a fish swam up to me. It was a smelt, right on the surface. I picked it up, we gazed at each other for a moment, and then I put it back in the water, and we went on our separate journeys. One year seven herons flew in formation through the cove. Herons are usually solitary stalkers. That was a beautiful omen. One year I was very impatient, demanding an omen. I spotted something washed up in the rockweed on the high tide line of the cove. It was a rubber bath toy, like a squeaky rubber duck, only this one was a cross-eyed crab with “Made in China” printed on its bottom, as if to say, “I don’t know what’s going on. Do you? All I can say is that it’s been a whirly-swirly journey.” That year the season was like that. There was no great Plan. We just let the winds and the tides carry us through, and somehow the work got done.

This year, digging in the garden, the apprentices found a salamander. I took that as a good omen, portending a lot of primordial energy in the garden, and the garden was, in fact, very lush and abundant. (The soil in my garden, by the way, is totally fertilized with seaweed, resulting in a dark rich loam.) 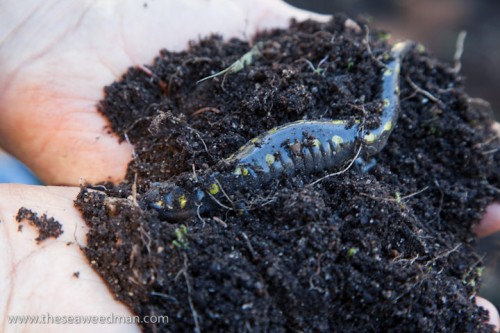 But there was no omen for the seaweed harvest. I decided to simply be patient and wait. I had four young men as apprentices. They would get distracted. One day Nina said to me, “There’s a Yiddish expression that describes your situation with these boys.” “Tell me,” I said. Nina smiled, “When you hire a boy, you got a boy. When you hire two boys, you got half a boy. When you hire three boys, you got no boy at all.” I laughed, “Nina, I’ve got four boys. I could be in deep trouble, except that the fourth boy is Jay (my son), and he counts for two.” We did, in fact, accomplish all the harvesting, drying, and packaging that I had set out to do, and on the final day of the alaria season (June 30th), we were finishing up a harvest on Bonny Chess Ledge, a place as beautiful as it sounds.

The tide was starting to come back in, and the boys had stripped off their wet suit jackets and were jumping into the surf to cool off. I lay down on a sloping ledge, six feet from the water’s edge. I thought, “Be grateful. You’ve accomplished what you set out to do. Now just relax. Let all your tensions go. In yoga, the Dead Man’s Pose is the hardest pose to do…..relaxing the body AND the mind.” As I relaxed, I turned my head to look toward the water, and there was a healthy baby seal, scootching toward me. I know the language of baby seals, so I spoke to it in its language. Every time I spoke, the seal scootched closer. Finally we were two feet apart, lying parallel to each other, rolled on our backs and looking up at the sky, utterly content. Then we turned and gazed into each other’s eyes. I said to the seal, this time in my own language, “You are so beautiful.” The seal responded with an affectionate puppy growl. I was a little surprised, and then I realized that this good-natured sound was the omen. One of the apprentices noticed what was happening and started to walk toward us. “Max,” I said, “get down low and roll over here. Don’t raise your arms.” Max rolled slowly, and finally we sandwiched the seal between us. We didn’t touch it. We talked and gazed. The seal remained totally relaxed. Finally I got up and resumed my work, loading bushel baskets of alaria into the punt in order to shuttle the alaria out to the container boat. Before I rowed away, I rowed up to the seal. The seal remained, a relaxed member of the group. Seal pups have very open playful hearts. Sometimes I will come upon a newborn seal that still has teeth marks on the umbilical cord stump where the mother chewed it off. There may be a fresh placenta nearby. In that case, I might talk to the seal just a little bit, and then leave quietly so that the mother will return. I’ve been around seals for 40 years, and they swim around me while I’m doing my work. This year, a baby seal brought the season’s omen-blessing, and I’m awash with gratitude as I remember that day.

4 thoughts on “The Work Accomplished, We are Relaxed into Perfection.”