Life evolved from single-celled creatures living in the nutrient-rich ocean. Seaweeds concentrate these nutrients, and when you make soup that includes seaweed, you are nourishing your body’s inner ocean that is around and in the cells of your body. The Seaweed Soup Mix offered at theseaweedman.com is a chopped blend that is 60% laminaria digitata kelp (similar to Japanese kombu used to make dashi, a delicious soup broth), 25% alaria esculenta (similar to Japanese wakame), and 15% laminaria longicruris, a delicate Maine kelp. This is the blend that I use in my own kitchen. I serve soup several times a week. After all, our bodies are mostly water, and we transact with seaweed and veggies at the level of water. Here is a recipe:

I start by filling a four quart soup pot half full of water. I turn on the heat and add four tablespoons of Seaweed Soup Mix. I add three tablespoons of rice or barley. I add a couple of slices of ginger root. I add three dried shitake mushrooms. I peel a few cloves of garlic and toss them in. When the pot comes to a boil, I turn down the heat. When the mushrooms have rehydrated, I remove them to cool, and then I slice them and return them to the soup pot. In a separate pan, I saute’ a medium size sliced onion with liberal sprinkles of thyme. I like to use sesame oil or coconut oil. When the onion slices are golden, I set them aside. I slice root crops like carrots, parsnips, rutabaga, beets, and turnips. When the grain is al dente (soft enough to chew), I add the root crops. If I want a sweeter soup, I might add a few slices of delicata squash and some cut sweet corn. (In midsummer, I would add cut string beans and summer squash.) During the last three minutes of cooking, I add greens like parsley and kale, and I add the saute’d onions. I season with Eden organic shoyu soy sauce (no alcohol) and sometimes a dash of cayenne. I serve up the soup with a topping of fresh parsley and/or chopped chives. When I reheat this soup on the second day, I add more parsley. The seaweed creates a rich creamy broth that boosts the savory flavors of this soup. Yum! 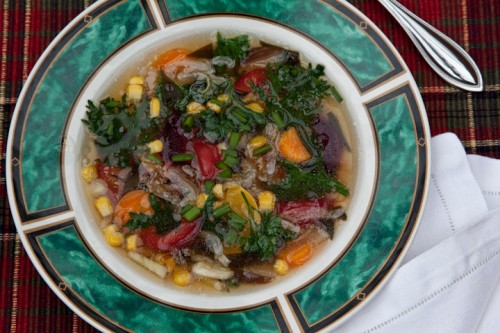